Alzheimer’s Disease is a chronic degenerative condition of the brain affecting more than 50 million people worldwide. It leads to gradual or rapid loss of cognitive ability i.e. the ability to perform tasks, think and remember clearly.

A gradual decline in cognitive function with aging is normal, but in a disease such as Alzheimer’s, the decline may begin earlier and progress faster. In the later stages of disease there are also effects on a person’s ability to function in normal daily life.

Alzheimer’s Disease develops years before the symptoms of dementia appear. It is likely that brain pathology begins up to 15 years before the appearance of mild cognitive impairment or clinical dementia. Earlier diagnosis and treatment are therefore a vital hurdle to overcome before we see a significant reduction in the burden of this disease. Approximately 8% of those over the age of 65 are affected by mild cognitive impairment (MCI) due to Alzheimer’s Disease, translating to approximately 4.2 million patients in the US alone.

Worldwide, the aggregate estimated cost of dementia (of which 62% of sufferers are diagnosed with Alzheimer’s Disease) is US$818 billion. Current conservative estimates expect the global cost to double by 2030. 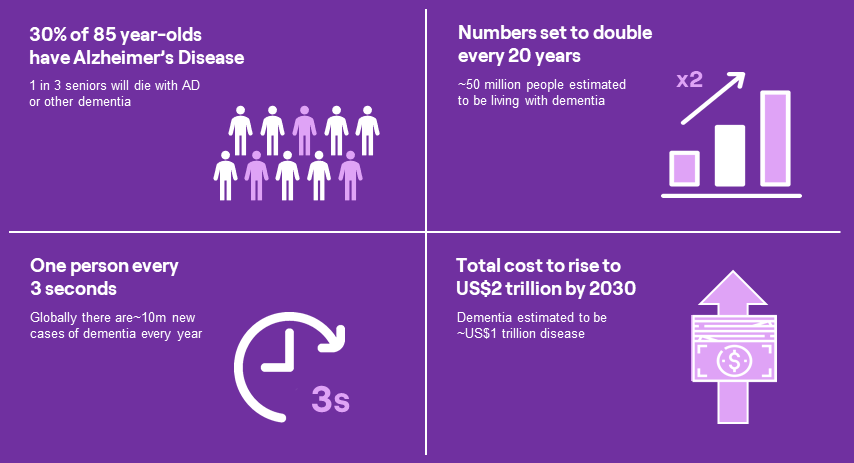 Of the top ten fatal illnesses, Alzheimer’s Disease remains the only one that cannot be prevented, treated or cured.

Recently, the US FDA provisionally approved an antibody therapy that is injected every few weeks for the treatment of Alzheimer’s Disease, based on its ability to reduce amyloid plaques in the brain and a mixed picture of effectiveness in clinical trials. That therapy is required to do more clinical trials to prove its effectiveness and gain a full approval. It is not approved in Australia or the European Union. So far, antibodies to the tau protein have failed in clinical trials. Previously, the early drugs developed to treat Alzheimer’s Disease provided only limited symptomatic benefit without slowing down the underlying disease significantly.

Alzheimer’s Disease sufferers desperately need new treatment options, and ideally, drugs with the potential to reverse the decline in brain function or slow the disease progression.

Association with excess cortisol underpins Xanamem as a potential treatment

Actinogen’s drug candidate Xanamem has been specifically designed to target and block production of cortisol inside neurons (cells) in the brain by inhibiting the activity of an enzyme, 11β-HSD1. Blocking this enzyme prevents the conversion of the inactive cortisone into the active cortisol, and thus reduces the effects of cortisol inside cells and on surface receptors outside cells.

The 11β-HSD1 enzyme is highly concentrated in the hippocampus, frontal cortex and cerebellum, the areas of the brain associated with cognitive impairment in neurological diseases, including Alzheimer’s Disease.

Find out more about our current clinical trials

Effects of stress throughout the lifespan on the brain, behaviour and cognition